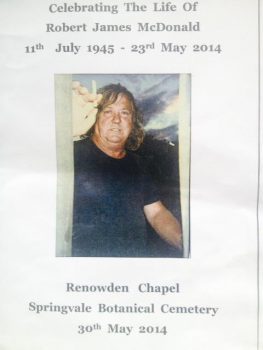 The world of building salvage has recently lost it’s grandfather and one seriously committed environmental activist!
(WHAT??? I can hear most of you smirk… doesn’t quite look the part does he?)

Bob McDonald died in the Bendigo hospital a few weeks ago…but not before regaling staff and fellow hospital room-mates with tales that had everyone laughing and seriously should have been recorded… if we’d been a bit more organised!

In the short few years that we came to know Bob, I was once again transported back to the lessons of my youth, ‘never judge a book by it’s cover’.
Growing up in a fairly remote part of Victoria, surrounded by large properties, presided over by fairly ‘large’ farmer types… it took me a long time to realise that just because they didn’t wear their ‘dreadlocks on the outside’ (as one farmer smartly dressed the cocky 19 year old me down one evening at the Tooma pub as I bandied my ideologies about) that didn’t rule them out for caring for the land…

Well Bob disbanded the same judgements by his actions and his contempt for the
petty competativeness that exists within the salvage industry.
‘We’re knockin’ it down to re use it, not to waste it’.

Bob ran a crew of house strippers, and the little I knew of his life was enough to inspire this short epitaph…

He didn’t grow up with a great deal of positive role models, apart from his sister Lorraine, whom he called every single day of his life, spent time in Beechworth prison, where he turned his hand at painting, the entire gaol interior!
It was in prison that Bob seemed to rally his crew for house stripping.
I know there was a stint in the house stripping game in Sydney prior to returning to Melbourne… he was always a bit dark on the game up there… had reckoned it got a bit too dirty (I didn’t go into that too much, so we left it there!).

But when Mat and I met Bob, he was operating out of a small yard near Laverton… and all we knew about him, was that he was revered by most of the salvage yard operators in victoria, and was the one that had set them all on their feet with his stock. Bob and his team must have been responsible for hand stripping thousands of tonnes worth of salvage from Victorian building demolition sites over the decades… and he always said that Mat was the last that would benefit from his work. Despite to service that Bob gave, things were getting tough.

The OH&S laws are tougher than ever to negotiate for someone small scale like bob, the developers are knocking down faster than ever before, it’s harder than ever to find ‘blokes who aren’t scared of a hard day’s work’ and the state government were honing in on his little patch for the freeway extension… compulsory acquisition… and he had to be gone within 6 weeks!

Bob’s carbon footprint (can hear him laughing!) must be one of the most insignificant marks. In the world of ‘doers’, he just did it… never blogged or tweeted about it… and guaranteed didn’t get much credit for any of it, except the close knit group of supporters in the same game who all quietly acknowledged what bob had done for them over the years.

He lived in a donga in his yard, amongst his treasures and also anyone else that needed a place to stay… there always seemed to be 4 or 5 blokes there amongst the squalor, fingers or teeth missing… but always smiling and willing to load your truck on Sunday afternoon.
A constant shuffle of elderly folk would come and go whenever we were there, pushing their trolleys ahead of them to Bob’s free firewood pile, which he always availed to the locals… without any fanfare.

We spent plenty of our weekends en route to visit family down that way, in Bob’s yard… dropping off trailers to be picked up again on our way home, loaded with goodies… for our yard, and always something random, like a pile of yabbie nets that one of the guys gave the kids.
As our youngest child said one day as we drove out… ‘Daddy has some funny friends, doesn’t he mummy?’.
That just about summed it up, it has been an honour Bob… go well!!